The project conveys information about the biology of wolves and the prevention of losses caused by wolves. The project also develops practical means to prevent losses, such as ways to protect hunting dogs. In addition, the project provides help for animal farms to protect domestic animals.

Every year, wolves kill and injure domestic and production animals in Finland. There are approximately 40 to 50 attacks by wolves targeting dogs annually. These, regrettably, often lead to deaths. Some 100 sheep deaths caused by wolves are registered every year. On average EUR 600 000 has been paid annually in compensation for injuries caused to reindeer. Cattle farms also incur losses every year, and wolves have also targeted fur farms in recent years.

Developing the prevention of losses is important to improve the coexistence of people and wolves. The LIFE BOREALWOLF project will develop tools for the prevention of losses of dogs and domestic animals and share know-how regarding the protection of animals. Well-functioning protective methods include erecting and maintaining fences properly, allowing animals to stay indoors in a particular shelter overnight and using wolf scaring device on farms.

However, if losses take place, it is important that a well-functioning compensation system is in place. Currently, losses of dogs and production animals are compensated in full, and a separate category has been set up for compensating losses of reindeer.

The prevention of losses calls for knowledge and practical tools

The project will provide studied and tested information about wolves for animal owners and local people. Knowing what kind of animal a wolf is, where it moves and how it behaves helps to face wolf-related challenges. Knowledge may also reduce fears and concerns. Project planners will cooperate with different parties and help people living in wolf regions to cope with wolves.

Owners of domestic and production animals and people who hunt with dogs already have access to various means to prevent losses. It is important that information about protection and useful practices is made available to everyone. During the project, domestic animal farmers will be interviewed and best practices will be collected, also from outside Finland. In addition, new methods will be developed for the prevention of losses. Information about wolves and the prevention of losses will be distributed, for example, at public events and during visits to farms.

Fences and repellents can be used to protect domestic animals. Traditionally, fences are built on farms where the value of protected animals is higher than the value of the fence material. The project will chart animal farms in risky areas and prepare preventive plans for them. Any animal farms in need of acute protection will be rapidly provided with electric fences.

The project will also test new ways to banish wolves from built environments, for example, using sounds or light.

Protective equipment for dogs will be developed and tested separately. The development of effective protective methods will reduce the risk of dogs getting injured when attacked by wolves, which, in turn, will improve the acceptance of wolves among hunters and the greater public. Specialists in the field will be involved in development. Seminars will be held for product developers and entrepreneurs interested in preventing losses of dogs.

In wolf regions, hunters already possess know-how of the prevention of losses. This know-how should be distributed to more recent wolf territories where people do not have much experience in how to live with wolves. Being aware of the presence of wolves in hunting regions, especially when the land is covered by snow, is one of the easiest ways to prevent losses of dogs. Sharing information about the movement of wolves among local people is a significant method of protection. Planners will implement best practices by offering and sharing information. 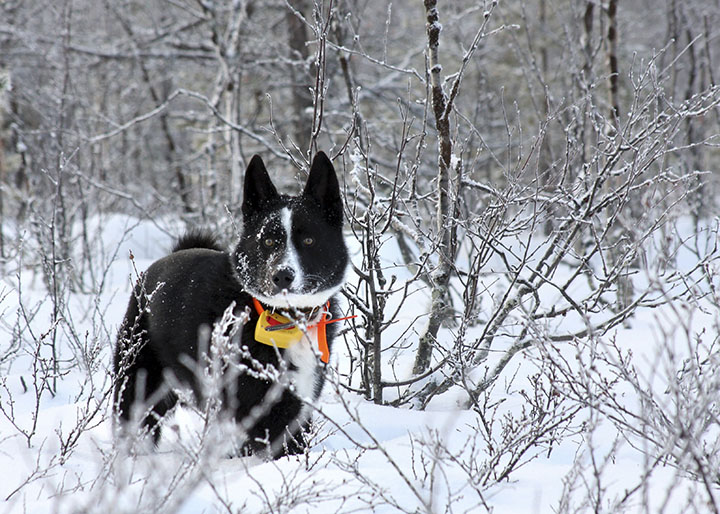 The project planners will meet people living in wolf regions and cooperate with them throughout the project.

During 2022, wolf scaring device will be tested on domestic animal farms. The development of a new dog vest version will begin.

During 2023, wolf scaring device will be tested on domestic animal farms. A new dog vest version will be completed.

During 2024, a toolkit will be released for preventing losses of domestic and production animals. The testing of new loss prevention methods will be completed.

After the project, proven wolf repellents can be borrowed from regional offices of the Finnish Wildlife Agency. Dog vests developed together with hunters will be used broadly and reduce losses of hunting dogs.

News on this topic

Beneficiaries to the LIFE BOREALWOLF project, coordinated by the Natural Resources Institute Finland (Luke), are the Finnish Wildlife Agency, Metsähallitus (Parks & Wildlife Finland), the Eastern Finland Police Department and the Uusimaa district of the Finnish Association for Nature Conservation.

The project has received funding from the EU LIFE programme (LIFE18 NAT/FI/000394). Other financiers are the Ministry of Agriculture and Forestry, the Ministry of the Environment and all implementing organisations. The Central Union of Agricultural Producers and Forest Owners (MTK) funds actions which prevent losses and protect domestic animals.
This website has been compiled by the LIFE BOREALWOLF project. Project beneficiaries take full responsibility for the materials included on this website. European Commission or the CINEA is not responsible for materials or any use that may be made of the information the website contains.